In Ghosts 'n Goblins, Arthur the brave knight saved Princess PrinPrin from the Dark Prince, Lucifer, and drove his evil forces back into the Underworld. Now, something sinister is again stirring...monsters had returned to attacking the kingdom, and the luckless Princess has been kidnapped - for a dark ritual to raise a greater evil than Lucifer!

Now, Arthur must go forth to save his beloved Princess and destroy the root of all evil! And it won't matter whether he fights in his shining armor or in his underwear alone, the bravest Knight in the land isn't going to be stopped by some monsters! Although the game starts with graveyard and marsh territory familiar from the first game, later levels are set in a tower, a mass of skeletons, and a castle.

He will progress from left to right, and have to hack down the aforementioned monsters with his sword. The journey includes ledges, ladders, lava pits and slippery slopes. Different weapons can be collected, by finding suits of armour inside chests. Each of the five stages has its own setting and a final boss. 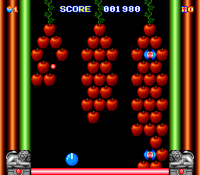