It's the 31st Century, and science and technology have progressed to the point that the human race is approaching perfection: no war, no poverty, and no conflict. With nothing to worry about, the human race seems destined to live forever in harmony; but what if Earth came under attack? By this point in time, people did not know how to cope with problems or conflicts, and had completely lost their survival instincts.

In response to this, the United Earth Government created the Gain Ground system, a war simulator that would help humans rediscover their lost instincts. After several terrible malfunctions, the creators became prisoners in their own creation. Now it's up to you and two courageous comrades to go into the Gain Ground system, rescue your fellow humans, and destroy the system. You'll battle through different periods in history as you revive your survival instincts, while trying to stay alive!

Art of Fighting 3: The Path of the Warrior 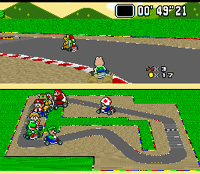